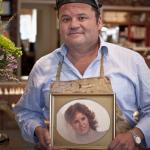 The U-M Transplant Center counts on volunteers to assure the success of many of our efforts and events. Sometimes a volunteer gets very involved, but their connection to us isn’t immediately apparent. That is the case with Curtis Gough.

Curtis has attended our Vita Redita gala since its beginning in 2003. He has donated jewelry for the auction, purchased tables, brought many guests, and participated on the planning committee for years. Curtis always told us that he found the Transplant Center to be a compelling and worthwhile cause. In 2010, he shared a very personal story that explained just why he understands our mission so well.

Curtis grew up in Indiana in a family of jewelers. His earliest memories are of family gatherings where his entire extended family, including children, shared in the craft of making fine jewelry. Learning from one another, and always pushing the envelope of creativity, Curtis was encouraged to explore his talent for creating elegant and unique works of art. Curtis grew up in the shadow of his older sister, Angie.

Angie was a gifted artist, creating jewelry pieces alongside her family members.  Beyond that, she was successful in academics and was a stunningly beautiful young lady. Angie competed in pageants, served as Homecoming Queen, and after graduation began studying at Indiana University. She planned to study medicine and become a pediatrician.

Tragically, Angie was in an automobile accident at age 19 and did not survive. Her brother Curtis was just 18 years old at the time of her death.  When his family agreed to donate Angie’s organs, the concept was completely new to Curtis.   He told me, “At the time, it was something I didn’t quite understand because I was a year younger than she was. As I grew older, I began to understand the importance of organ donation.” Indeed, Curtis learned that the gift of life was a lasting legacy of his sister Angie.

“She had the world,” Curtis explained. Curtis has honored his sister’s memory and her gift of life by giving generously to the Transplant Center. “This is my number one priority event.  And it’s because of the memory of my beautiful sister,” he said.

Today, Curtis is the proprietor of La Jolla Fine Jewelry in Chelsea, Michigan, where he designs and creates unique works of jewelry art. Curtis created incredible one-of-a-kind pieces such as necklaces, bracelets and earrings each year to donate to the Vita Redita. The pieces are sold at the event auction and have brought many thousands of dollars to the Transplant Center over the years.

“I give to the Transplant Center and support the Vita Redita to honor my sister’s memory,” Gough said. Not only did Angie give the gift of life, but today her brother continues to support organ donation and transplantation. “I give to many causes, but this one means more to me than any of the others,” Curtis recently told us. The Transplant Center is fortunate to have friends like Curtis and his family in the community. Because of his generosity and commitment to our success, we are able to continue to build on our tradition of saving lives and doing all we can for our patients and families.