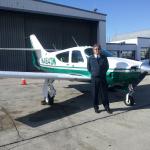 Scott Sedam loves to take to the sky, and he truly loves to give back to the Transplant Center. Scott grew up flying with his Dad, a former fighter pilot, and by the age of 29 he had earned his own pilot’s license. He dreamed of owning his own airplane but that dream wasn’t to come true until he was in his 40’s. Scott bought his Rockwell Commander single engine airplane in the summer of 2001 and within months he began dialysis. This turn of events, while unexpected, did not leave Scott out of the flying picture. He spent his time on dialysis studying for his instrument rating — the next step in his flying career. Scott was fortunate to receive a kidney from a family friend. She is from Canada and asked that Scott from that day forward wear a Canadian maple leaf pin every day. Scott proudly wears the gold maple leaf and whenever anyone asks him if he is Canadian, or why he wears the pin, he uses the opportunity to start a conversation about organ donation.

About 5 years after his transplant, Scott found himself flying his plane mostly for business. Scott is a former executive with Pulte homes who now owns TrueNorth Development, a consulting group working with building industry clients throughout North America, Mexico and Australia. Scott’s parents were both teachers and they instilled in him the importance of volunteering and giving back. He decided to combine his love of flying with his desire to show his gratitude for his transplant and second chance at life.

Scott became a pilot for Wings of Mercy — taking flights for both its east and west Michigan divisions. Wings of Mercy pilots volunteer their time and their airplanes and are reimbursed by Wings of Mercy only for the fuel.  After being approved by the chief pilot, volunteer aviators like Scott are paired with volunteer co-pilots on every flight. Pilots cannot apply to be Wings of Mercy volunteers unless they have recorded over 1,000 hours of flight time.

Now celebrating ten years since his transplant, Scott has flown many patients to and from hospitals throughout the Midwest to get them to medical appointments and follow-up visits. Of course, some of his favorites are transplant patients. As Scott points out, a patient driving from Marquette to Ann Arbor would be on the road for up to 12 hours and he can make the trip in less than 3 hours.

Scott’s very first volunteer patient flight in his airplane was to take a young girl from Michigan to see her doctor in Pennsylvania.  When she saw the plane, she called it the “Green Angel” and the name stuck. Another memorable flight in the Green Angel was to bring a patient home from Chicago. It was a typical mid-winter rainy, dark, dreary day but the Green Angel got the instrument clearance to fly up through and above the cloud deck. When they broke through into the sunshine, his passenger began shrieking that it was “the most beautiful sight” she had ever seen.

Moments like that keep Scott busy flying Wings of Mercy flights at least once a month, even while running his growing business. He is grateful every day for his donor, his transplant surgeon Dr. Campbell, and his nephrologist, Dr. Luan at the University of Michigan Transplant Center. As Scott put it: “This is just what you do. "I've been returned to health and I have this airplane, and I want to give back any way I can. It makes perfect sense to me.”